Irina Sterligova. About the Ancient Cloisonne Enamels with Sacred Images Created in Russia

Attributions of cloisonné enamels with images of Saints Irina and Barbara from the Staroryazan hoard of 1822 among the works of Old Russian painting of the second half of the 11th century.

Daria Skobtsova. Some Technical and Technological Features of the Main Fresco Ensemble of Our Savior Church in Polotsk

The paper deals with some aspects of the technology and technique of the main fresco ensemble of the Transfiguration Church, created by order of St. Euphrosyne of Polotsk. In our opinion, the stylistic features of the painting point to the middle of the 12th century as for the time of its creation. However, there is no consensus among art historians on the dating of the architecture and wall paintings of the Church of Our Saviour. Full-scale surveys of the church, which have been conducted in recent years, confirm the previously proposed thesis that there was no gap between the construction and the execution of the painting. The paper presents data on the specific use of plaster markings by the painters in Polotsk, as well as the preparatory drawing.

The collection of laws of the city of Lübeck of 1294, the so-called Bardewik Codex, unlike other books of the city law of the Hansa, is richly decorated with initials that open each article. 237 initials, the ornamentation of which differs both in drawing and in the variety of combinations of saturated colors which lie on a gold background, were apparently executed by several artists of the city atelier after the scribe's work was completed. The article is devoted to the description and classification of the code’s initials. Analogies to decorative motifs can be found in the design of monuments of pre-Romanesque, Romanesque and Byzantine art: these are spirals, five-petal Byzantine crines, hearts, palmettes, braids, arabesques and others. The upper and lower ends of elongated ornamental stripes are often completed with Gothic motifs of a cross, spitz, phial, cones, cruciferous, tripolia (more than 30). The extensive and diverse ornamental repertoire of the Bardewik Codex makes it a unique piece of book art created by a group of urban artists.

Andrey Iaganov. A New Look at the Chronology of Stone Architecture in the Chudov Monastery of the 14th–15th Centuries

The article is devoted to the stone buildings of the Moscow Kremlin Chudov Monastery of the 14th–16th centuries — the churches of the Miracle of Michael the Archangel at Chonae and Alexius the Metropolitan. The author offers his own version of the chronology of their construction and alterations in this period, different from the previously established ones. In addition, an attempt is made to reconstruct the circumstances of the acquisition and transfer of the relics of Metropolitan Alexius during the 15th century, directly related to the construction history of the Chudov Monastery.

Moscow Kremlin, Chudov Monastery, Metropolitan Alexius, architecture of the 14th–16th centuries, monastic churches of the Miracle of Michael the Archangel at Chonae and Alexius the Metropolitan.

The presented paper is the first half of the article devoted to the problem of dating architectural structures by methods of archeology and epigraphy. It demonstrates some errors in the work of restorers, which damage the authentic remains of original structures and make it difficult to date them. An example is the catholicon of the monastery of Peter the Metropolitan in Moscow. Its date within the 1510s is established due to a full-scale study. Also, with the help of archeology, it was possible to restore the history of the construction of the church in the 17th century. However, during the last restoration, some of the masonry was destroyed. It is proposed to clarify the dates based on the surviving tombstones of the 16th– 17th centuries that were used for the second time. The characteristics of these slabs and the reading of their inscriptions are given.

St. Trinity Antony-Siya Monastery was founded in 1520 not far from the Northern Dvina River entry. Old Testement Trinity icon was painted in 1538 by Saint Antony (1478–1556), the founder of the Monastery. The first wooden Trinity Cathedral at the Monastery burnt down but the Trinity icon was saved. Lots of miracles, connected with this icon, are described in St. Antony of Siya hagiography. It was placed above the reliquary with his remains and decorated with a jeweled frame, presented by Patriarch Filaret.

Tatiana Tsarevskaya. Images of Novgorod Saints in the John’s Cell of the Episcopal Chambers in Veliky Novgorod: The Time and Circumstances of Their Appearance. Part Two

Soon after 1558 the established “duo” of the Novgorod saints Nikita and John were added to the ancient image of Sophia the Divine Wisdom (in the so-called Novgorod izvod), which decorated one of the niches of the “cell of John” in the Bishop's Chamber of the Novgorod Kremlin. Over the following centuries the fresco underwent repeated updates. The article examines the stages of these changes based on the analysis of changes in the iconography of St. Nikita. A fragment of another image near the niche with this fresco is reconstructed as part of the figure of St. Euthymius the Great — the heavenly patron of the builder of the chamber, Bishop Euthymius of Vyazhishchi. In later updates, this figure was identified with the archbishop himself. In fact, the figures of Holy Novgorod bishops grouped around the image of Sophia the Divine Wisdom both in the “cell of John” and on other monuments around the middle of the 16th century, not only capture an important stage in the formation of the Novgorod pantheon of holiness, but also reflect the social and state ideas of the 1560s, which guided the policy of Novgorod in an effort to demonstrate their loyalty to the centralized secular power of Moscow.

The article is devoted to the attribution of the tablet icon “Theophany — The Synaxis of John the Baptist” (22.7 × 19.1) from the Museum of the Russian Icon. It has undergone a comprehensive study at the State Research Institute for Restoration, which revealed some features of artistic execution, the degree of intermittent interventions, and the painting technique. The unique iconography of the tablet which combines the feasts dedicated to John the Baptist, allows us to talk about a significant series of icon calendars, thus reflecting the formation process of the iconography of the Synaxis of John the Baptist (January 7) in Russia. By its specific technique of execution, artistic style and iconography the icon can be connected with the Pskov art of the 1540s.

Andrey Batalov. The Church of the Martyr Antipas of Pergamon and its Place in the Periodization of the Construction of Churches with a Groin Vault

The article is devoted to the construction date of the church of the holy martyr Antipas of Pergamon at the Great Stables. The resemblance of the Moscow buildings of the late 1540s, the cathedrals of the Moscow Simonov and Novodevichy monasteries, as well as the cathedral of the Kirzhach Annunciation Monastery allow the church to be dated to the late 1540s — 1550s. The peculiarities of the interior, the profiling of parts, as well as the size of small bricks all point to the same period. According to the peculiarities of the composition, the church of the Holy Martyr Antipas can be placed next to the cathedral of the Moscow Danilov Monastery (1561), which may also have had a crown of multi-row kokoshniks. Both churches belong to the architectural tradition, formed in the monastery construction in the middle of the 16th century and associated with the construction of four-pillar buildings, which mainly have a ceiling structure in the form of raised supporting arches. The Church of the Holy Martyr Antipas has a special place in the typology of churches with a groin vault of the beginning — the second half of the 16th century, which are mostly covered by trifoils.

Iuliia Buzykina. Saints of Rostov the Great in the Wall Paintings of the Archangel Cathedral

The paper deals with depictions of the holy bishops and monks of Rostov the Great in the system of the wall paintings in the cathedral of the Archangel of Moscow Kremlin. The saints of this city, which is one of the oldest Russian cathedrae, establish the ancientness of the Russian church as an institution and the role of secular authorities in the expansion of the Orthodox Christian Faith in Russian and Tatar lands.

Nadezhda Pivovarova. The Silver Shrines of Russian Miracle-workers of 17th Century. To the Question of the Construction and Appearance of the Precious Tombstones in the Time of Earliest Tzars of the House of Romanov. Part Two: Works of 1670s

Lada Kondrashkova. Who Art Thou, Lord? Exhibition in the Central Andrey Rublev Museum of Ancient Russian Culture and Art

Mariya Makhan’ko. The Icon Prophet John the Baptist, Angel of the Desert, with Hagiography from the Collection of the Vyatka Art Museum named after A.M. and V. M. Vasnetsovs Presented after the Restoration

Mariya Makhan’ko. Protector from the Banks of the Velikaya River: Nikola Velikoretsky and Other Images of St. Nicholas the Wonderworker from the Collection of the Vyatka Art Museum and Private Collections

Lev Lifshits. Book Review: O. A. Ryzhova Icon Painting in the Artistic Culture of Kiev at the End of the 17th–18th Centuries. Kiev, 2020

Andrey Yaganov. E. A. Turova. The Results of the Archaeological Work of the State Hermitage Museum Old Russian Expedition during the 2018 Season in the Context of Studies of the Appanage Princes Palace Complex in the Uglich Kremlin. Archeology of the Vladimir-Suzdal Land. Materials of the Scientific Seminar, vol. 9. Moscow, 2019, pp. 129–140. 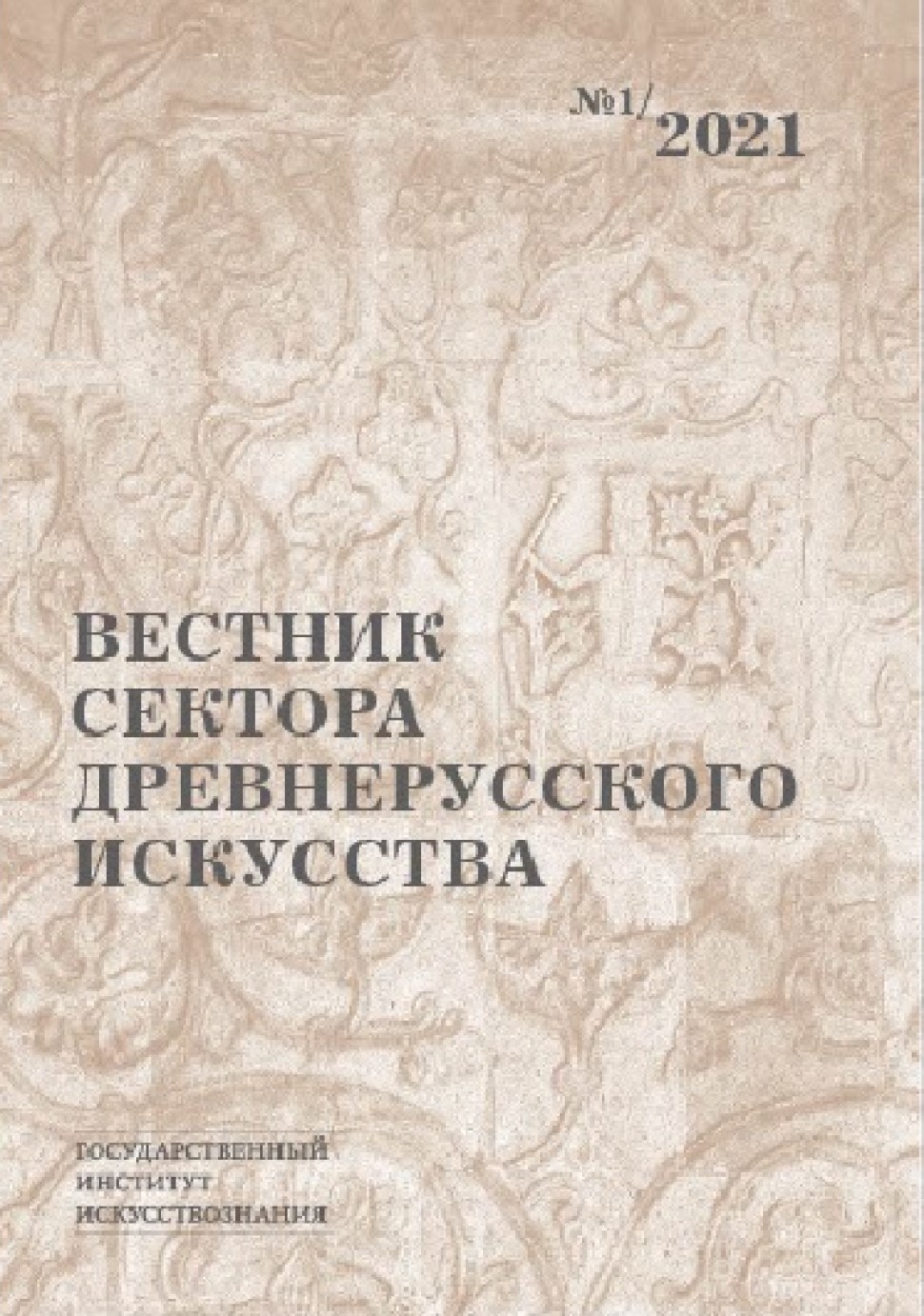 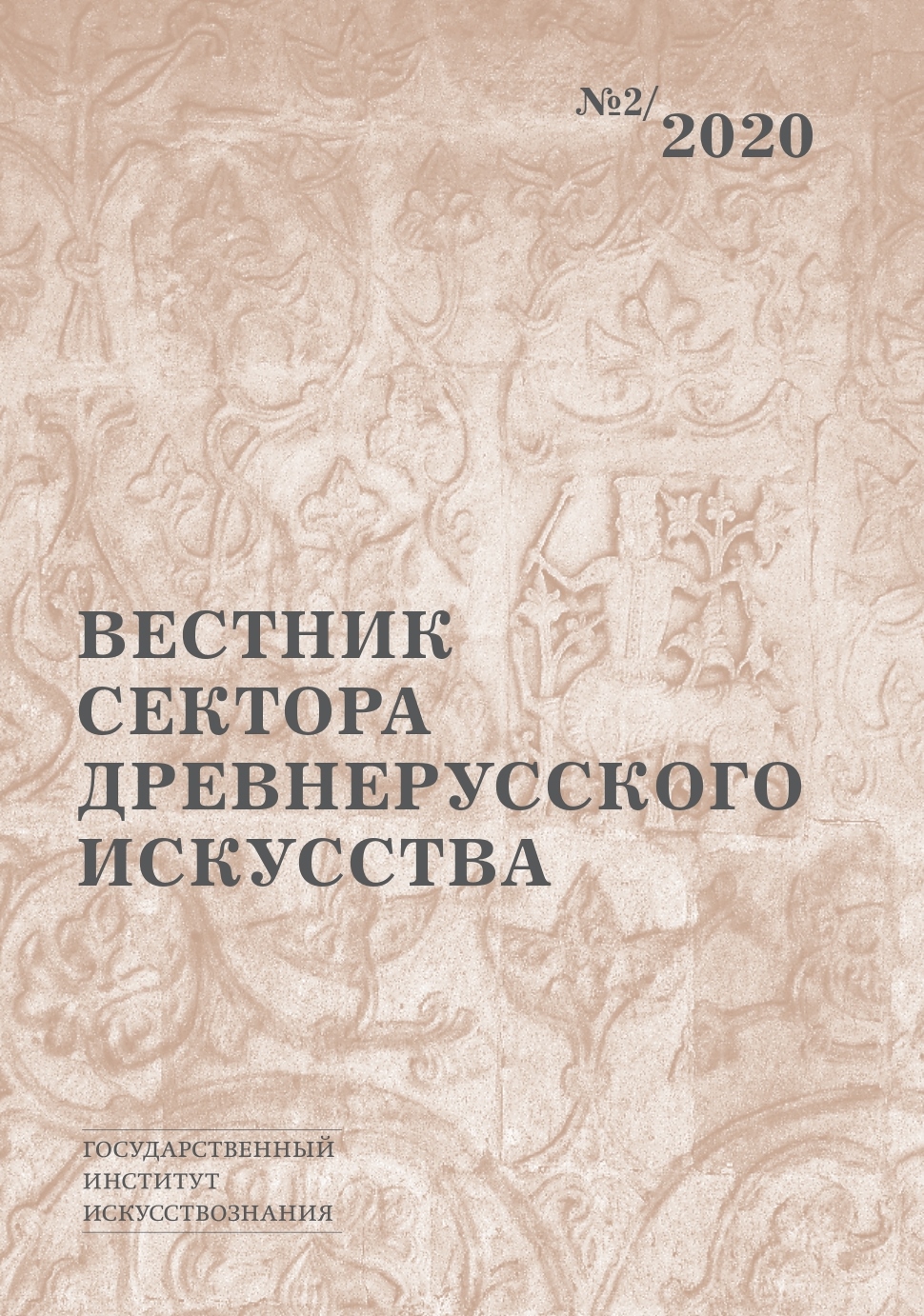 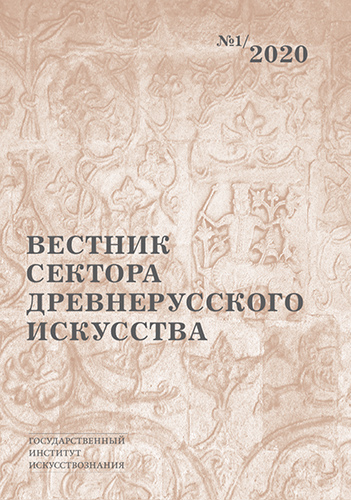 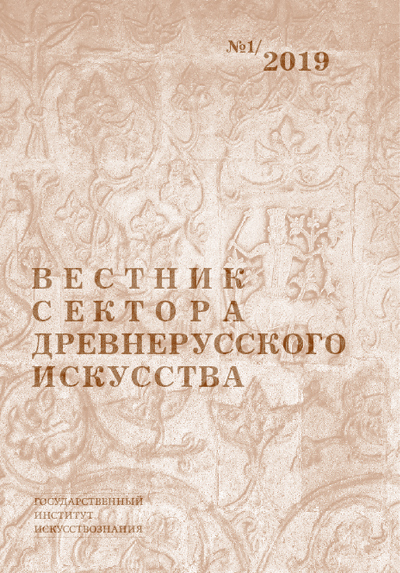